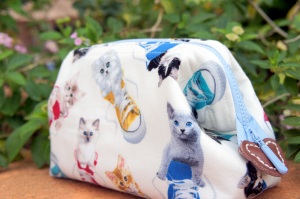 What is the alternative methods besides doing Yoga or meditation if you’re feel bored/clueless sometimes? For me, I will choose to do my handcraft items – SEWING. It’s give me some sense of satisfaction and happy feeling whenever each of my masterpieces is ‘born’…..because craft is unique in its own way !

Follow your bliss and the Universe will open doors for you where there were only walls – Joseph Campbell, Mythologist

Here is another masterpiece which I just ‘created’…… as per my bliss feeling…..

Features of this pouch:

A lover of unique handmade or cat lover like you, I believe you would like to add this pouch as part of your collections. Feel free to drop your order at sales@petsmanic.com or petsdreamz@yahoo.com

The Myths Quarrel of the Cat and Dog

The myths why cat cannot go along with dog….

According to a Jewish fairy tale, in the infancy of the world, the dog and the cat were the greatest of friends. They lived together, play together and shared each other food. It seemed that nothing could ever come between them.

Then someday, a winter come. The world grew cold and hard and food became scarce. Hunger made the dog melancholy, while the cat grew peevish and petulant. Finally, the cat proposed that since there was no longer enough food to be had for both of them, they should go their separate ways. She told the dog that she intended to go alone to the house of Adam to rid his house of mice.

The dog was deeply hurt, but the cat said solemnly, “We must each take an oath never to cross the other path. That is the proper way to terminate a business agreement. The serpent says so, and he is the wisest of all animals.”

The cat duly went to the house of Adam, and grew fat and comfortable, while the dog wandered over the frozen ground, exhausted, starving and lonely, of use to neither wolf nor sheep. One night, he came to a house and begged a morsel of food from the owner. Later that evening he woke the man to warn him that wild animals were attacking his home. ‘Good dog’, said the man. ‘You are a wise animal. Stay with me always. You will find Father Adam kind.’

‘I say you must,’ answered Adam, and the dog was compelled to obey. In the morning, the cat learned that the dog had joined the household and she was angry.

‘The dog has violated our oath. He swore not to come to the place where I am,’ she said.

‘There is ample room for you both,’ Adam replied. But the cat hissed and spat her disapproval, while the dog stood dejectedly, with his tail between his legs. As time went on, the dog could bear it no longer.

‘I must leave you, Father Adam,’ he said. ‘The cat is making my life unbearable. I shall go to the house of Seth.’

‘Are you sure that you cannot make friends with the cat?’ asked Adam.

‘I would do so with pleasure, if she would let me, but alas she will not.’

‘In that case,’ said Adam, ‘you will be quarreling for ever.’ And ever since that time the cat and dog have failed to agree.

All They Ask Is Just The Basic Things….

All they ask for is the most basic shelter, food and water, and in return, they give us unbounded, unflinching affection.

All the pets never request us to give them the most luxury items or stuff. All they want is just a basic shelter, food, water and caring from us. In return, they will give us their unbounded, unflinching affection.

Do take an example of the street dog. When you provide them just the basic clean food and water, they will wag their tails so happily to thank us. Before you reach their place, they already sense it and will wait anxiously to welcome you…. Doesn’t it so miracle and blessed?

Please don’t compare and judge between ‘luxury’ and ‘non-luxury’ pets! Treat them equally and you will gain the greatest love of all from them…

Cats are connoisseurs of comfort

Cats’ calming presence could bring comfort and relaxation to human being. This talented, tender loving creatures can do the same as the dogs  too. What they need is the chance to prove their ability.

Don’t ever compare between cats and dogs as both of them have their own unique personality. Do remember, all living creatures deserve plenty of care and respect from us too. Don’t torture and leave them behind!

Our perfect companions never have fewer than four feet. – Colette-

What will be the perfect companions for you besides your dearly husband, wife, children, friends, diamonds, toys and etc? If you are one of those pet lovers, your answer will be PETS! PETS! PETS!……

This is very true indeed that our perfect companions will never have fewer than four feet. Either it is cat or dog,  they will always the first one to greet you when you back your home early or late. For dogs. they will wag their tails happily to agree with you whenever you invite them for a walk or just a leisure drive. For cats, they will purr it sweetly to accept your ‘offer’.

So, what else can we complain? Do love them all….. 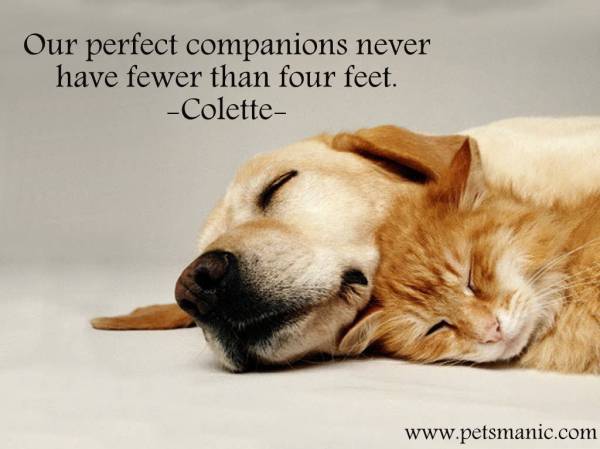 The Exquisite Of Cats

I believe cats to be spirits come to earth. A cat, I am sure, could walk on a cloud without coming through.
– Jules Verne-

For those who has ever known the comforts of living with a cat, they will agree, a cat is a special creature which full of mysterious characteristics. Yet, they can become part of your visible soul after day by day living together under one roof. Their demeanour pose can make you believe they can walk on a cloud without coming through.

Differences viewpoint between cats and dogs

What can be view between cats and dogs  in their state of mind?

Whatever is it , both of these canines and felines deserve unconditioned love from human being. Give them  good tender loving care, the return will be marvelous and precious one!

Who Is The Cat?

Who is the cat and what is the real description of cat?

It might be that cat may have virtually none of the dog’s positive attributes, they neither have dog’s negative traits too. Cats will not bark, slobber or jam their snouts into the unsuspecting loins of your guests. Their graceful movement, their mobile ear and unrivaled paw are very pleasant to observe. So, what will be the opinion about cat ?

For all cat lovers,  it will be  “what is more great gifts than having a wonderful cat as companion!”…… You will never know until you get a cat!  This make….

“The cat is the animal to whom the Creator gave the biggest eye, the softest fur, the most supremely delicate nostrils, a mobile ear, an unrivaled paw and a curved claw borrowed from the rose-tree” – Colette-

Cat does not offer services but itself….

The cat does not offer services. The cat offers itself – William S. Burroughs

Many people had been misunderstand that cats are naturally anti-social and not friendly. But the actual fact is not. Instead of looking at cats through a human lens of what “friendliness” means, it’s worth learning the unique ways that cats show affection. For example, if your cat rubs up against your leg, she’s telling you you’re part of the colony. 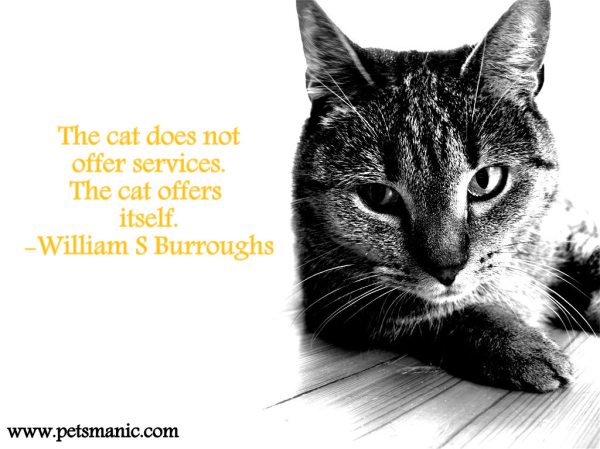 Poem for a cat

Dear creature by the fire a-purr,
Strange idol, eminently bland,
Miraculous puss! As o’er your fur
I trail a negligible hand,
And graze into your gazing eyes,
And wonder in a demi-dream,
What mystery it is that lies,
Behind those slits that glare and gleam,
An exquisite enchantment falls
About the portals of my sense:
Mendering through enormous halls,
I breathe luxurious frankincense….

Abstracted from Lytton Strachey, “The Cat”

Ramblications of a hairy pudding

I don’t want a perfect life; I want a happy one.

The life of a couple of West Highland White Terriers in Madison, MS USA.

Sharing thoughts, recipes, crafts, music and books all of the things I love

The latest news on WordPress.com and the WordPress community.